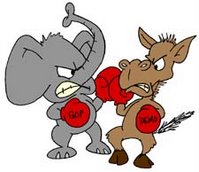 As many of you have probably guessed, the change in the control of the House and Senate is welcomed by me. Oversight, balance, and hopefully bipartisanship will be restored to the federal government, in hopes that the divided America will champion both sides of the argument.

I have also discussed with friends and family the expectations of the new Democratic powers. Interestingly enough, other perspectives are a bit more extensive then mine. I suspect that Democrats will work with President Bush to raise the minimum wage, find common ground on immigration, and work out a plan to fix the Medicare system. For those who believe that the Iraq policy will be reversed, or that taxes will increase, you have watched one too many campaign commercials. There is a larger focus of the Democrats’ control of congress, November of 2008.

Waiting for the Clinton/Obama ticket (just guessing), Democrats in the House will be careful with their oversight. They will not cut funding for the Iraqi war to change policy, as was done withVietnam, and they will not use any pre-war miscalculations to punish President Bush. They will use their political soapbox to weed out corruption, and try to exploit findings involving their Republican colleagues. They will not try to pass any drastic legislation that will hurt their popularity with the moderate voter. Plus, the President maintains veto power, and will probably use it more than just once as in the previous six years. The Democrats will use their renewed power to restage committee heads, and bring legislation to the floor that benefits their agenda. The leadership might sponsor wedge issues that hurt the President’s popularity, like stem cell research.

I believe that the congressional changing of the guard is not a vote for the policies of the Democrats, but a referendum of the actions of the Republicans. Democrats have earned about as much “political capital” as Bush in 2004, and hopefully will maintain a better track record. As Jon Stewart put it, “Democrats played the role of the boy who left the room as his brother is punished for burning the garage down”. I am excited to see the power shift, and hopefully it will lead to a better America.