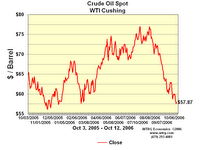 Could our two oil executives who are running America actually have some impact on gas prices? Recent polls seem to suggest this idea, with the majority of American believing that the recent uncharacteristic dip in gas prices is the basis for some conspiracy theory. And why not? Gas is down a dollar a gallon in most neighborhoods to the delight of all Republican candidates.

However, the reality that gas is impacted by the commodities market is not easily understood. Investors buy future commodities much like they do other investments. They buy on speculation that the prices will rise, and sell to realize a profit. One of the reasons Southwest Airlines has continued to realize profits, is largely dependent on how they have managed their oil portfolio. Many investors bought oil at a high price speculating that another hurricane might damage the oil supply from the Gulf of Mexico (where 25% of our oil supply comes from). With no real hurricane activity coupled with the ending of summer travel months, demand has decreased and negative speculation has brought skyrocketing gas prices back to earth.

Will these prices last? Most likely no. When demand rises, and the commodity markets begin to return confidence to investors, gas prices will again increase. For the time being, Christmas has come early for Republicans, and they are playing the Santa role bringing the gift of gasoline to America.